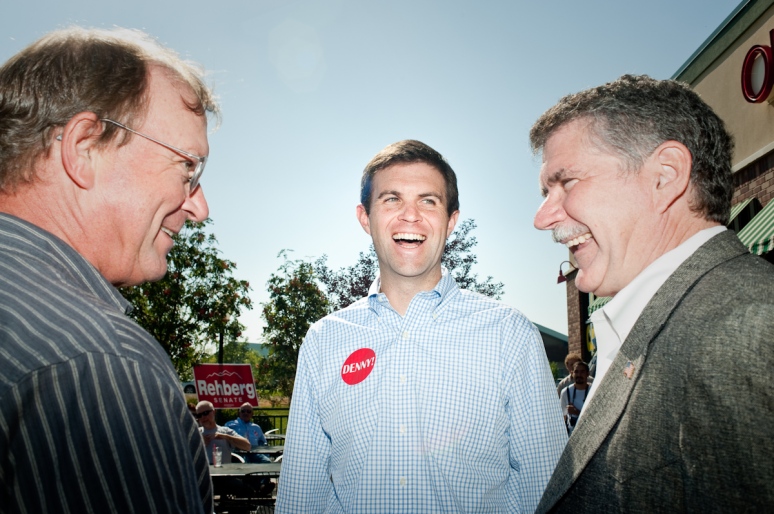 I’ve been a Democrat since 1984. And every election season the rhetoric amps up to such a state that each side seems to think the other is the personification of evil. That bothers me.

Last Thursday, I gave my Be Who You Is talk to a great crowd in Great Falls, complaining, “Our society today is so divided. We are so insulated from differing points of view that we no longer have to listen to one another….” And I got a call from a Washington, D.C., marketing agency asking me to cover some events for the U.S. Chamber of Commerce the next day. The events were endorsements of Republican Senate candidate Denny Rehberg by the U.S. Chamber of Commerce.

Let’s be clear: I have no plans to vote for Mr. Rehberg. In fact, I have a campaign sign for his opponent, Jon Tester, in my front yard as I write.

But this was my chance to demonstrate a willingness to work with and listen to those to which I am politically opposed.

So I’m glad I did the assignments. Rob Engstrom (that’s him in the middle, with Congressman Rehberg on the right) and other U.S. Chamber speakers talked about endorsing candidates regardless of party, and afterward agreed with me about the large problem divisiveness is currently. One guy even said he liked Jon Tester personally, he just wasn’t planning on voting for him.

I was glad to hear that. In short, I feel I made some friends from the other side. And that felt good. It gave me hope.

7 thoughts on “Getting Along”