To stick with something for six weeks is said to be all that’s needed to form a habit. These days, to have a job for 10 years is something of an achievement. To spend an entire lifetime on something is remarkable, and to spend multiple lifetimes in dogged determination is downright admirable.

Montana has been a state for 125 years this November. It was named a territory just a generation earlier. People have been ranching and farming this country for about as long, but we all know that times and ideas change, evolve. New generations are born with their own ambitions.

So when a ranch or farm stays in one family over a span of 10 decades or more, it’s to be celebrated.

The Montana Historical Society thinks so and in 2009, announced the creation of the Montana Centennial Farm and Ranch Program. So far, about 28 families have gone through the process of gaining official recognition as a Centennial Farm or Ranch. Here are three:

Benjamin Armstrong had nearly completed the coursework for an engineering degree from Iowa State College when he homestead a farm east of Geraldine in 1909. When his son Henry took over in 1965, The elder Armstrong had either built or drastically altered every piece of machinery except the tractor.

Henry Armstrong began working the farm with his dad after serving in the Marines in World War II. He’s in his mid-80s now and most of the day-to-day operations have passed on to his son, Stuart. Hope is that Stuart’s son, Alex, 24, will one day take over after he does a stint with the Marines like his grandfather.

Alan Armstrong is 24 years old and helps out with chores like welding on the Armstrong farm. But he’s just signed on for a stint the Marines, like his grandfather. So his future on the farm is uncertain.

Stuart Armstrong takes a hammer with him to fix a small problem with a combine.

Henry Armstrong pages through a journal his father kept in the year he homesteaded.

Near Sidney, John Mercer oversees the farm his grandfather Andrew Mercer homesteaded in 1901 along the Yellowstone River. A businessman, Andrew Mercer had been a prospector and owned and managed properties including a saloon in addition to the cattle, horses and wheat he sold. Andrew Mercer’s son, Russell, spent his life on the ranch and he and his wife, Mary, were active outside the family farm. Russell Mercer served in local government and Mary Mercer was an active advocate for the preservation of local history.

John Mercer is the sixth of Mary and Russell Mercer’s seven children. “I was doing construction in Denver,” he says, “and I came back in 1972 to save the place after Dad had a heart attack. I never knew anything about farming or ranching.”

He’s now semi-retired, he says, only managing the dry land farming at the place, leaving the irrigated fields to someone else.

John and Kathy Mercer pose in front of the house John’s grandfather Andrew Mercer built in 1906 at the age of 36, five years after homesteading the property.

John Mercer holds a picture of his mother. 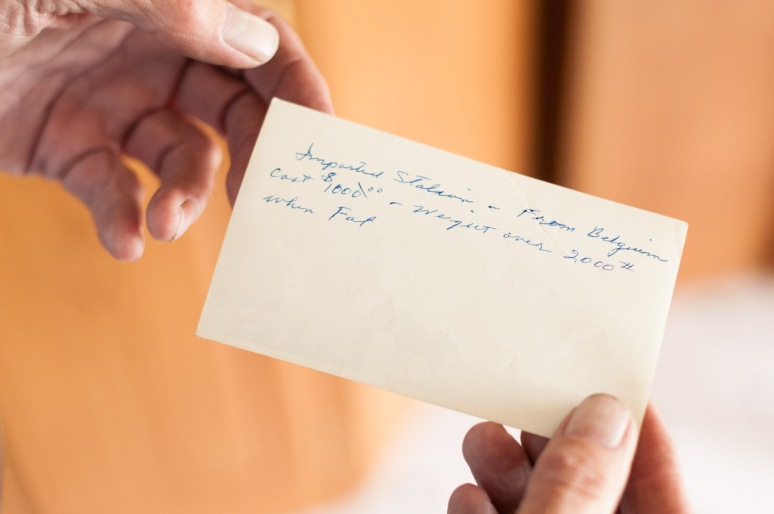 Laura Etta Smalley was a 25-year-old school teacher in Canada in 1910, prohibited from owning land because she was a single woman. That summer, she traveled into Montana, hired movers and a couple of wagons to carry a 12-by-16-foot cabin to a half-section of land just 10 miles south of the Canada border. When the movers left, she spent the night alone for the first time in her life. Her nearest neighbor was half a mile away.

More than a century later, her grandson Tom Bangs watches over that original half section, plus a few more, while his son Jeff eases into taking over the operation.

“It’s a pretty appealing life, really,” Tom says. “To be your own boss, to manage the land.”

Tom and Carol Bangs pose with their son Jeff and his wife, Katie. Carol, a native of Havre, is glad Jeff and Katie are there. “I value heritage,” she says. “Continuing on what your family started.”

A neighbor is a neighbor — even if half a mile or more separates the homes. The Bangs Farm is in a neighborhood known as “Minneota,” barely five miles south of the Canada border. “People are close, even though the distances are great,” says Carol Bangs.

Jeff Bangs, right, is 29 years old and in the process of taking over from his dad. Newly married, Jeff has land and equipment of his own while he eases into taking over the operation.

Jeff Bangs loads grain for winter wheat into a seed drill as evening comes on. As he begins his farming career he knows to expect the road to get rough. “You have to maximize the good times,” he says. “do as well as you can when you can and have some resources ready.”