I’m so proud to be in the current issue of Montana Magazine. I’m prouder still to be able to say that my good friend Al Kesselheim and I are hogging the entire issue.

Several months ago, editor Sheila Habeck approached us with a project to cover the four corners of Montana and that project now takes up the entire September/October issue of Montana Magazine. What a treat to explore this wonderful place and attempt to distill the qualities that make it so special. We found community, history, character and landscape qualities unique to each region and at the same time, common to the whole state.

Eureka, in the northwest corner of the state, exemplifies the sense of community we’ve found throughout our state. Like many towns, Eureka’s economy is a little stormy — like this spring storm lingering over the Purcell Mountains nearby. Residents are struggling to adapt to an economy moving away from it historic roots — timber in Eureka — and into new places like tourism.

Historian and publisher Gary Montgomery, a Eureka resident for more than 40 years, says people around Eureka find ways to get along. “We’re constantly thrown in together” he says. “There’s just not enough going for people to choose sides.” 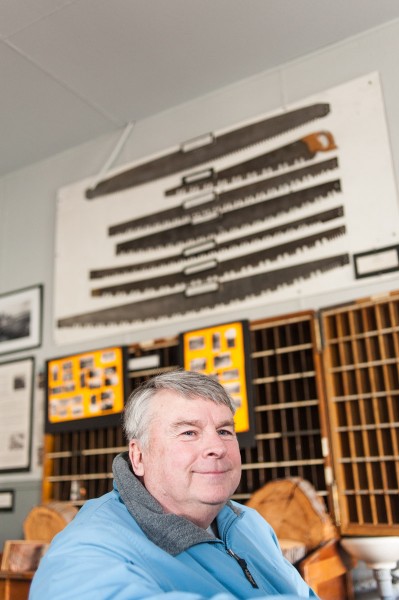 “I kind of feel like Eureka is a little lost,” Darris Flanagan says. “We exist now primarily on the Canadians. There’s still pride. But I think we’re searching — as an area — for something.” Timber and the Christmas tree industry was a big part of the town’s identity on into the 1990s. “There was a lot of pride” in Eureka trees, Flanagan says, but those days are all but gone.

Mr. Flanagan says a big effort has been made to spruce up Eureka’s downtown. And while many Eureka residents choose to commute to jobs 65 miles away in Flathead County, he expects Eureka’s economic priorities to shift toward tourism and recreation in the future.

Eureka is just a few miles from the Canadian border, and American liquor and cigarettes are popular with our neighbors to the north. Dave Clarke runs the First and Last Chance, a bar and duty free store right on the Canadian line, and his dog Bear has been keeping vigil through all kinds of weather for 14 years.

One industry that is being courted by Eureka is outdoor recreation. The sands along the shores of Lake Koocanusa (Kootenai, Canada, U.S.A.) provide a big playground for motor sport recreation, drawing folks from near and far.

Cheryl Titus says she and her husband, Al, say they received a lot of community support during Cheryl’s recent battle with cancer. “People are very caring,” Al says, while the couple burns leaves and cleans up a little at the first signs of spring. “[People] came out of the woodwork to help.”